Gaige Grosskreutz watches video as he testifies about being shot in the right arm during the Kyle Rittenhouse trial at the Kenosha County Courthouse on Monday in Wisconsin. 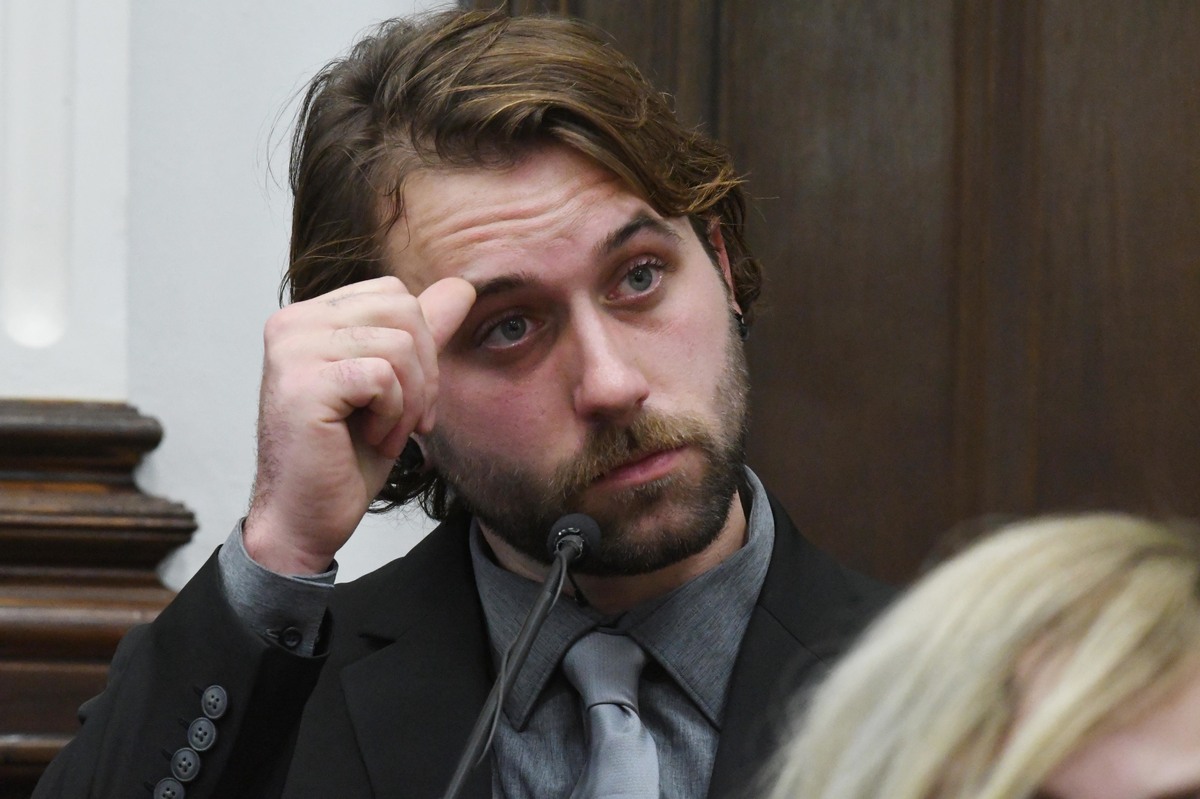 Gaige Grosskreutz watches video as he testifies about being shot in the right arm during the Kyle Rittenhouse trial at the Kenosha County Courthouse on Monday in Wisconsin.

Gaige Grosskreutz, the only person who survived being shot by Kyle Rittenhouse last year at a chaotic demonstration in Kenosha, Wis., took the stand in a pivotal moment in Rittenhouse’s homicide trial.

In three hours of dramatic testimony Monday, Grosskreutz, 27, acknowledged that he was armed with a pistol on the evening of Aug. 25, 2020, but said his hands were raised when Rittenhouse raised his rifle at him, and that he feared for his life.

“I was never trying to kill the defendant,” he testified. “In that moment, I was trying to preserve my own life. But doing so while also taking the life of another is not something that I’m capable of or comfortable doing.”

Rittenhouse’s defense lawyers have said Rittenhouse was acting in self-defense when he fired his AR-15-style rifle that night.

In cross-examination, they emphasized Grosskreutz’s Glock pistol — which was in his hand at the moment Rittenhouse shot him — and proximity to Rittenhouse, just about three feet, at the time of the shooting. Grosskreutz said he was not intentionally pointing the weapon at Rittenhouse.

Grosskreutz, a paramedic from Milwaukee, had attended dozens of Black Lives Matter demonstrations that summer, acting as a medic and legal observer. He carried medical supplies, made livestreams of the events and wore a hat that read “paramedic.”

Grosskreutz was also carrying his handgun holstered in the small of his back. His conceal-carry permit was expired at the time — which Grosskreutz said in testimony that he was unaware of that night.

The confrontation with Rittenhouse

Grosskreutz was roughly a block away from Rittenhouse when he first heard the gunshots — the sound of Rittenhouse shooting and killing Joseph Rosenbaum. As a medic, Grosskreutz ran toward the sound, rather than away, he said.

But then he encountered Rittenhouse. Hearing shouts from the crowd that Rittenhouse had just shot somebody, Grosskreutz decided to run in the same direction Rittenhouse was headed.

Prosecutor Thomas Binger sought to characterize Grosskreutz’s change of direction as motivated by the fact his “services as medic might be more needed in the direction the defendant was headed.” Defense lawyer Corey Chirafisi repeatedly called it a “chase,” which Grosskreutz denied.

“I thought that the defendant was an active shooter,” he said. “Anytime you bring a firearm into that equation, the stakes are much higher for both serious injury and death.”

As he approached, Rittenhouse was confronted by Anthony Huber, who struck him with a skateboard. Rittenhouse shot Huber in the chest, killing the-26 year-old.

Grosskreutz had drawn his gun, holding the pistol in his right hand and his cellphone in his left. He testified that he did not draw the gun “with the express intent of using it” but rather to be “ready” if he felt that it was necessary.

Then, Rittenhouse turned his rifle on Grosskreutz. Asked what he thought at that moment, Grosskreutz replied, “that I was going to die.”

Video evidence shows Grosskreutz stopping and raising his hands, his pistol pointing in the air. Grosskreutz testified that he saw Rittenhouse re-rack his rifle to load a new round into the chamber.

“In that moment, I felt that I had to do something to try to prevent myself from being killed or being shot,” Grosskreutz testified. “I decided the best course of action would be to close the distance between the defendant and I, and from there, I don’t know … wrestling the gun, detaining the defendant, I don’t know … I do know that I was never trying to kill the defendant.”

Prosecutors sought to draw a contrast between Grosskreutz and Rittenhouse, both of whom came to Kenosha calling themselves medics.

Grosskreutz testified in detail about his medical education and training, and his experience working as an EMT and a paramedic for a private ambulance company in Milwaukee.

Before being shot by Rittenhouse, Grosskreutz had treated about 10 people for injuries from pepper spray and rubber bullets, he testified.

“I spent, up until that point, spent my time, my money, my education providing care for people. It’s not who I am,” he said, voice shaking, when asked why he did not shoot Rittenhouse himself. “And definitely not somebody I would want to become. And in that moment, I thought it would — I tried to attempt a non-lethal way to end that interaction.”

After the shooting, Grosskreutz spent a week in the hospital for emergency care and several months doing physical therapy, he said. He described experiencing lasting weakness, muscle loss and neurological damage.

Defense lawyers worked to cast doubt on Grosskreutz’s testimony by pointing out inconsistencies between his words in court and statements he gave to police in the days following the shooting.

Chirafisi asked why Grosskreutz did not initially tell police he had a gun that night.

“I had just gone through one of the most traumatic experiences of my life, both emotionally and physically,” Grosskreutz replied. “I had just gotten out of surgery. I had just been sedated. I was on pain meds. It wouldn’t have been a purposeful omission.”

In January, Grosskreutz and Huber’s parents each filed $10 million negligence claims against the city of Kenosha and Kenosha County.

Chirafisi suggested that Grosskreutz was hoping for a conviction in Rittenhouse’s case to improve his odds of winning the $10 million.

Grosskreutz has also filed a lawsuit in federal court accusing city and county officials in Kenosha of illegally deputizing a “roving militia” of “white nationalist vigilantes.”