“How profoundly — profoundly — unpresidential,” McConnell said Wednesday on Capitol Hill. “I’ve known, liked and personally respected Joe Biden for many years. I did not recognize the man at the podium yesterday.”

McConnell said Biden’s speech was a “rant,” “incoherent,” “incorrect,” “beneath his office,” and “unbecoming of a President of the United States.”

McConnell said that Biden’s speech is further proof of why the filibuster, which requires 60 votes to advance most legislation, should stand. 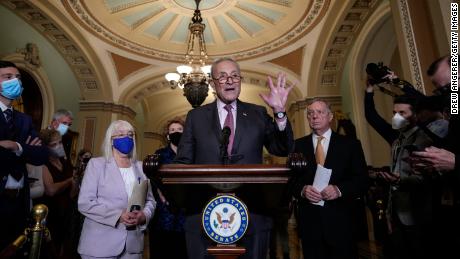 “You could not invent a better advertisement for the legislative filibuster than what we’ve just seen, a President abandoning rational persuasion for pure, pure, demagoguery,” McConnell said. “A president shouting that 52 senators and millions of Americans are racist unless he gets whatever he wants is proving exactly why the framers built the Senate to check his power.”

“This whole display is the best possible argument for preserving … the Senate rules that extend deliberation, force bipartisan compromise, and let cooler heads prevail,” he said. “It offers a perfect case study in why Senator Biden was right about the filibuster and President Biden is wrong.”

“The people who spent November 2020 through January 21 preaching sermons about the strength and the sanctity of our democracy are now undertaking to delegitimize the next election in case they lose it,” McConnell said.

“We have a sitting president, a sitting president, invoking the Civil War, shouting about totalitarianism and labeling millions of Americans his domestic enemies,” he continued. “We have a Senate Democratic leader who now frequently calls American elections quote ‘a rigged game.’ Look, this will not be repaired with more lies, more outrage, and more rule-breaking. Unfortunately, President Biden has rejected the better angels of our nature.”

This story has been updated with additional developments Wednesday.

Covid news and the latest on the Omicron variant: Live updates