Competing lawn signs are placed outside of a polling place on Tuesday, Nov. 2, 2021, in Minneapolis. Voters there are deciding whether to replace the city’s police department with a new Department of Public Safety. The election comes more than a year after George Floyd’s death launched a movement to defund or abolish police across the country.(AP Photo/Christian Monterrosa) 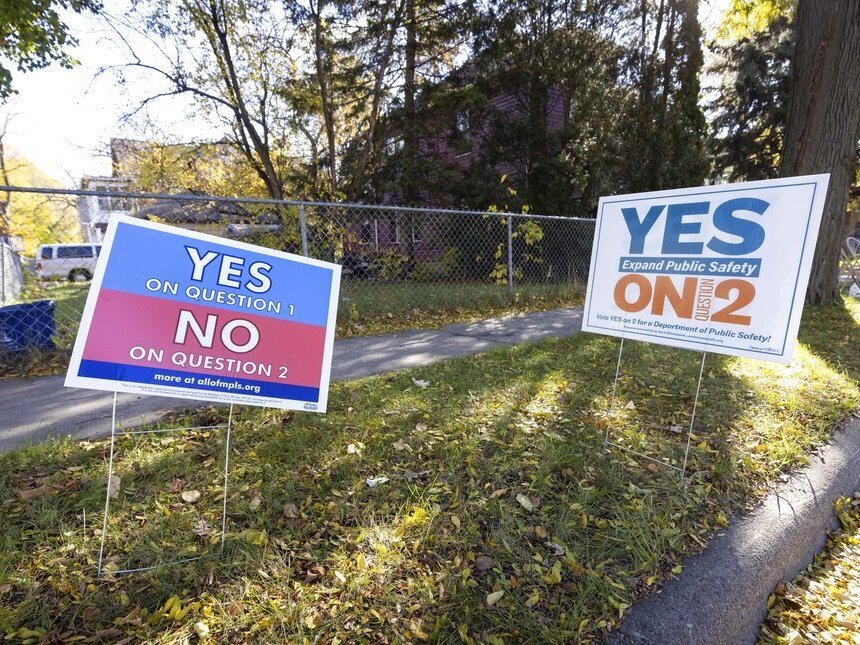 Competing lawn signs are placed outside of a polling place on Tuesday, Nov. 2, 2021, in Minneapolis. Voters there are deciding whether to replace the city’s police department with a new Department of Public Safety. The election comes more than a year after George Floyd’s death launched a movement to defund or abolish police across the country.(AP Photo/Christian Monterrosa)

Voters in Minneapolis have resoundingly rejected a proposal to reinvent policing in their city, 17 months after the killing of George Floyd by police sparked massive protests and calls for change.

Approximately 57% of voters rejected a ballot question that would have removed the Minneapolis Police Department from the city charter, replacing it with a “public-health oriented” Department of Public Safety.

Nationally, the vote was seen as a test of the political movement to “defund” traditional policing, as it ran up against concerns about rising violent crime.

The “defund” movement, which called for shrinking police budgets and shifting the money to other social purposes, gained ground in the summer of 2020. A few days after Floyd’s murder, most members of the Minneapolis city council appeared at a “defund” rally.

But as violent crime surged nationally — and in Minneapolis — some of those same local politicians backed away from the idea. In 2021, the “Yes” campaign, supported by national left-of-center groups such as the ACLU and MoveOn.org, also distanced itself from the “police defunding” label.

Campaign spokeswoman JaNaé Bates framed the amendment as an “expansion of public safety.” She said the elimination of the traditional department structure — and the requirement for a minimum number of police officers — would give the city more flexibility in how it responds to crime.

“You actually can staff the department the way that meets the needs of the people,” Bates told NPR in October. “We wanted to really be centered and focused on the safety of human beings.”

The “No” campaign — “All of Mpls,” funded partly by local business interests — framed the amendment as a leap in the dark.

“It does not present any sort of plan for what will come after,” says campaign manager Leili Fatehi. “There’s no specificity as to what services [the Department of Public Safety] would provide, what law enforcement would look like, what residents can expect.”

Opponents said it was a dangerous time for that kind of uncertainty, as an exodus of police officers left the Minneapolis Police Department understaffed, even as the city endured a near-record spike in gun crimes and homicides.

The two sides jousted over whether traditional police officers would be part of the new system. The “No” campaign pointed to the language of the charter amendment, which said the new Department of Public Safety “could” employ police officers, “if necessary.”

“Yes” campaigners called the warnings about the disappearance of police “fear-mongering.”

“Police will be part of the city of Minneapolis,” Bates said during a debate in October. “There is a state mandate, that overrides anything that the city sets up, that requires police officers to respond to a whole series of situations.”

The two sides also argued over the Police Chief, Medaria Arradondo. An African-American officer who came up through the ranks of the MPD, he’s more popular than most local politicians, and minority groups in the city see him as a force for reform.

Opponents of the amendment warned that eliminating the office of Chief of Police would mean losing Arradondo, while proponents said there would be no reason he couldn’t be kept on in the leadership of the new system.

Arradondo roiled the waters last Wednesday when he spoke to the press — in uniform, and in front of an MPD backdrop — to express his misgivings about the charter amendment.

“Yes” campaigners criticized the chief for taking sides, drawing an ethics complaint for using city resources to weigh in on a political matter.

Democrats deal on prescription drugs would lower costs for seniors