Pro-Trump supporters storm the U.S. Capitol following a rally with then President Donald Trump on Jan. 6, 2021. 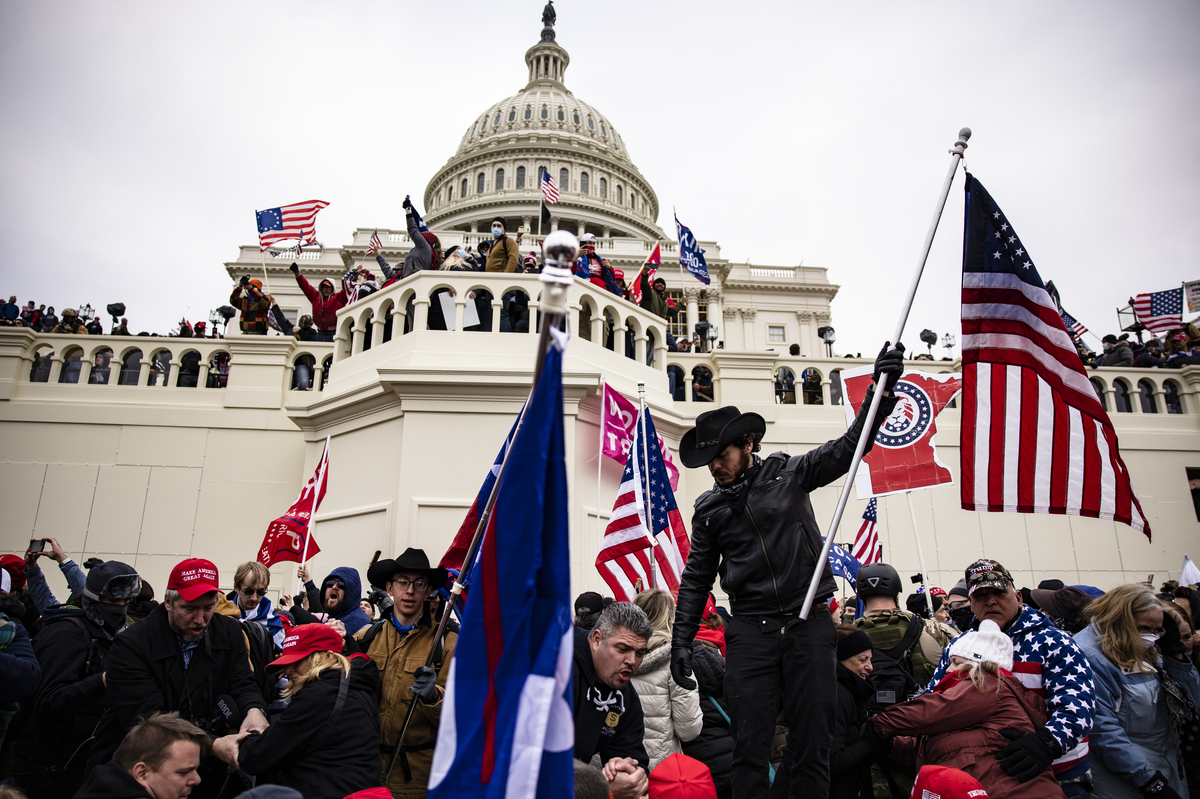 Pro-Trump supporters storm the U.S. Capitol following a rally with then President Donald Trump on Jan. 6, 2021.

Even the vigils speak to our differences.

As the nation reflects on the year since a violent mob attempted to stop the certification of election results, there will be gatherings for those who believe the attack was an attempted coup, and who are alarmed by the passage of restrictive voting rules in several states.

There will also be events for those who falsely maintain that former President Donald Trump won the 2020 election, and who consider those arrested in connection to the riot “political prisoners.”

Whatever hopes Americans may have held that 2021 would be a year of healing across the political divide has turned out quite differently. Instead, surveys indicate rising alarm over a democracy in crisis, the birth of a mass movement sympathetic to insurrection, and growing support for political violence.

A “mass movement” built on a lie and violence

In the immediate aftermath of the riot, the energy behind it appeared to have been driven underground. Key voices, Trump principal among them, were removed from Twitter. Online gathering spaces such as Parler went offline. Paranoia about increased surveillance by law enforcement led groups such as the Boogaloo Boys to cancel public gatherings.

But the relative quiet was temporary.

“These movements aren’t broken in any sense, and they’ve spent the last year very diligently trying to figure out how to overcome the new hurdles that are in front of them,” said Jared Holt, Resident Fellow at the Atlantic Council’s Digital Forensic Research Lab (DFRLab), which has tracked the online activity of the far right during the past year. “Many of them have been successful in doing so to varying degrees.”

Research from the DFRLab tracked how, particularly starting in the summer of 2020, far right groups refocused on a decentralized, on-the-ground approach to find new sympathizers.

Instead of organizing large, national gatherings around false claims of a stolen election, they inserted themselves into local debates over racially inclusive school curricula and school mask requirements.

According to Mary McCord, a visiting professor and executive director of the Institute for Constitutional Advocacy and Protection at Georgetown University, the messages they spread through that grassroots approach were also reinforced at the top by many Republican leaders.

“To me, one of the most alarming developments of 2021 since the insurrection has been the effort, especially among influencers and politicians, to normalize mainstream conspiracy theories, most predominantly election denial, and to also normalize in the mainstream political, ideologically driven violence,” she said.

A recent survey from the Chicago Project on Security and Threats (CPOST) at the University of Chicago estimates that 21 million adults now fall into what it calls the “American insurrectionist movement,” characterized by the incorrect belief that Trump won the 2020 election and that use of force would be justified to return him to the White House.

“What we are facing is a significant amount of community support right across the body politic, in line with the sentiments of Jan. 6th, that has not simply disappeared,” said Robert Pape, professor at the University of Chicago and director of CPOST. “And that really is concerning for the future because what that means is there is a fairly large amount of, think of it as dry kindling in the country, that can be touched off by a spark that could then turn into another wildfire.”

The new face of extremism

As researchers have learned details about the more than 700 suspects arrested in connection with the Capitol attack, there is a growing realization that traditional tools to counter extremist violence in the U.S. may not apply.

A CPOST analysis of the suspects’ social and economic demographics shows they are older, more educated and enjoy more economic and familial stability than right-wing violent offenders who have been arrested by federal authorities in recent years.

“Over half are either business owners – they own floral shops or are CEOs – or [are] from white-collar occupations, [like] doctors, lawyers and attorneys,” said Pape. “You’d have to go all the way back to the rise of the second KKK in the 1920s to see middle-class whites engage in this kind of collective political violence. It’s really quite, quite historically significant.”

But in surveying broad community support for insurrection, Pape said research from CPOST did find a signifier that distinguishes that group from the rest of the body politic: belief in replacement theory.

“They are very concerned about the idea that the rights of whites are being overtaken by the rights of minorities, or that the Democratic Party is bringing in immigrants in order to change the demographics in the country deliberately to disenfranchise the current conservative voters,” said Pape.

Once fringe, replacement theory has increasingly crept into mainstream discourse. The readiness of some Americans to accept it points to the very weakness that led a mob to storm the Capitol based on lies about election fraud.

“We can’t monitor and deplatform our way out of this situation,” said Cynthia Miller-Idriss, a professor and director of research at American University’s Polarization and Extremism Research and Innovation Lab. “People have to have the skills and the ability to recognize that propaganda for what it is.”

Experts agree that solutions will require input and action from stakeholders that go beyond law enforcement — including faith leaders, educators and politicians. They also agree that the path toward those solutions appears unclear right now.

“Sometimes, you know, you just feel like you’ve got to get out of this mental space because it’s so depressing and distressing,” said McCord. “But I also think we have to keep talking about it.”