New York real estate heir Robert Durst is sentenced to life in prison without the possibility of parole for killing his best friend Susan Berman at the Airport Courthouse on Oct. 14, 2021, in Los Angeles. 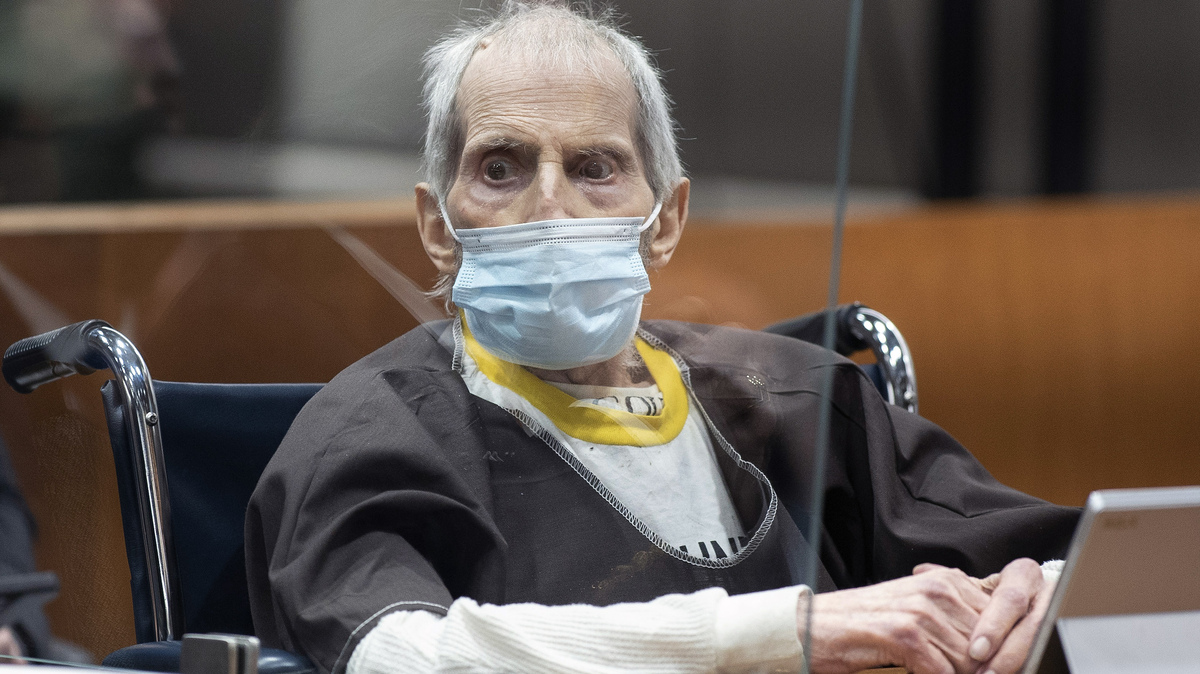 New York real estate heir Robert Durst is sentenced to life in prison without the possibility of parole for killing his best friend Susan Berman at the Airport Courthouse on Oct. 14, 2021, in Los Angeles.

NEW YORK— Robert Durst was indicted Monday for murder in the death of his first wife, Kathie Durst, whose disappearance nearly four decades ago has long shadowed the incarcerated millionaire, contributing to his increasingly bizarre and violent behavior and leading to an infamous on-camera confession.

Durst is serving a life sentence in California for killing a confidante who helped him cover up Kathie Durst’s slaying. Durst was hospitalized on a ventilator with COVID-19 after his Oct. 14 sentencing in the Los Angeles case and was transferred last week to a state prison hospital. His medical condition was not released but a mug shot showed no sign of a ventilator.

Rocah said a warrant has been issued for Durst’s arrest in the New York case.

“When Kathleen Durst disappeared on January 31, 1982, her family and friends were left with pain, anguish and questions that have contributed to their unfaltering pursuit of justice for the last 39 years,” Rocah said in a statement announcing the indictment.

Rocah said her office “reinvigorated its investigation” into Robert Durst when she took office in January, launching a cold case unit and dedicating necessary skill and resources. She decided to take the case to a grand jury in early October. Rocah said Durst’s indictment is a “huge step forward in the pursuit of justice for Kathie Durst, her family and victims of domestic violence everywhere.”

Asked by a reporter if he had any reaction to the indictment, Durst lawyer Chip Lewis replied in an email: “Fake news!” Asked in a subsequent email if he’ll be representing Durst in the New York case and whether there are concerns about moving him to New York, given his health issues, Lewis responded, “Not sure he will make it. But if he does, I’ll let you know.”

Durst appeared to admit to killing people in the HBO documentary, The Jinx

A lawyer for Kathie Durst’s family said they were still processing the news of the indictment and would speak more about the matter in the coming days.

Kathie Durst’s 1982 disappearance garnered renewed public interest after HBO aired a documentary in 2015 in which the eccentric Durst appeared to admit killing people, stepping off camera and muttering to himself on a live microphone: “Killed them all, of course.”

The grand jury that indicted Durst kept meeting and hearing witnesses even after State Police Investigator Joseph Becerra filed a criminal complaint in a town court in Lewisboro, New York, on Oct. 19 charging Durst with second-degree murder. He had never previously been charged in her disappearance.

Such filings are often seen as a first step in the criminal process because, in New York, all felony cases require a grand jury indictment to proceed to trial unless a defendant waives that requirement.

Kathie Durst was 29 and in her final months of medical school when she was last seen. She and Robert Durst, who was 38 at the time, had been married nearly nine years and were living in South Salem, a community in Lewisboro. Her body was never found. Robert Durst divorced her in 1990 citing abandonment. At the request of her family, she was declared legally dead in 2017.

Robert Durst’s behavior became increasingly erratic as investigators made several attempts over the years to close the case. In 1999, authorities searched a lake and the couple’s home but turned up little evidence, with Becerra equating the search to a “a needle in a haystack.”

Durst was convicted in September of killing a friend

In December 2000, Durst shot and killed his best friend, Susan Berman, as she was preparing to tell police about her involvement in Kathie Durst’s death. She had told friends she provided a phony alibi for him after his wife vanished, prosecutors said.

Durst was convicted in September of killing Berman. Afterward, Los Angeles prosecutor John Lewin described him as a “narcissistic psychopath,” saying Durst “killed his wife and then he had to keep killing to cover it up.”

After Berman’s death, Durst went into hiding, disguising himself as a mute woman living in a cheap apartment in Galveston, Texas. There, he killed a neighbor, chopped up his body and tossed it out to sea. Durst claimed self-defense — that he and Black were struggling for control of a gun — and was acquitted. He was convicted of destroying evidence for discarding the body parts.

Durst was also sentenced in 2016 to over seven years in prison after pleading guilty to a federal weapons charge stemming from a 2015 arrest in New Orleans.

Robert Durst’s family owns more than 16 million square feet of real estate in New York and Philadelphia, including a 10% stake in One World Trade Center, the Manhattan skyscraper formerly known as the Freedom Tower. Family members bought out Robert Durst’s stake in the business for $65 million in 2006.

In the 2015 HBO documentary The Jinx: The Life and Deaths of Robert Durst, Durst appeared to admit killing people and admitted he made up details about what happened the night she disappeared because he was “hoping that would just make everything go away.”

Durst, who has numerous medical issues, sat in a wheelchair for much of the California trial and sentencing hearing. He read his lawyer’s questions from a tablet giving live transcriptions because he struggles with hearing.

Durst, testifying in the Los Angeles trial in August, denied killing Kathie Durst. After her medical school called to report that she hadn’t been going to class, he said he figured she was “out someplace having fun” and suggested that perhaps drug use was to blame.

“It hadn’t occurred to me that anything had happened to her,” Durst said, speaking slowly in a strained, raspy voice. “It was more like: What had Kathie done to Kathie?”