Travis McMichael is testifying in his own defense in the murder trial over the February 2020 killing of Ahmaud Arbery, with lead prosecutor Linda Dunikoski cross-examining him on Thursday.

McMichael shot and killed the young Black jogger after chasing him in a pickup truck through a Georgia neighborhood with his father and a neighbor.

Dunikowski probed the defense’s contention that the three men were attempting to make a citizen’s arrest of Arbery, and that McMichael killed him with a shotgun in self-defense after a brief struggle.

“Not once during your statement to the police did you say that you and your father were trying to arrest Mr. Arbery, did you?” Dunikowski asked.

“No ma’am,” McMichael answered. He later said he never had time to tell Arbery that he was under arrest for any crime.

McMichael is one of three white defendants in the case; all are facing murder charges in Arbery’s death.

The prosecution rested its case on Tuesday.

“I want to give my side of the story,” McMichael said on Wednesday, telling the court that he wanted to explain what happened from his point of view.

The prosecutor asked about vigilantism and comments on social media

The prosecutor asked McMichael about his views of vigilantism, highlighting several comments he made to his Satilla Shores neighbors on Facebook, including one in July of 2019 when he told people to arm themselves to confront criminals.

And in January of 2019, Dunikowski said, McMichael praised a woman who called for making an example of people who steal.

“That’s right,” McMichael told the prosecutor, when he was reminded of the remark in court.

In another comment in that same online conversation, Dunikowski said, McMichael agreed with his neighbor’s concern about how her father might interact with thieves: “It just worries me because my daddy is slap old crazy. LOL He’s old as dirt and doesn’t care about jail.”

“That’s what this world needs more of,” McMichael replied on Facebook. “My old man is the same way.”

“Hell, I’m getting that way,” McMichael added in the post.

On the witness stand, McMichael affirmed that he had written the comments.

Earlier, McMichael said he believes some of the details he included in both his verbal and written statements to police weren’t accurate.

And when Dunikowski asked him if his father had yelled at Arbery, “Stop or I’ll blow your f***ing head off” — a quote from earlier testimony by police — McMichael replied, “I don’t think I heard him say that, no ma’am.”

Travis McMichael is testifying in his murder trial in the Glynn County Courthouse in Brunswick, Ga. He, along with his father, Greg McMichael, and a neighbor, William “Roddie” Bryan, are charged in the February 2020 slaying of 25-year-old Ahmaud Arbery. 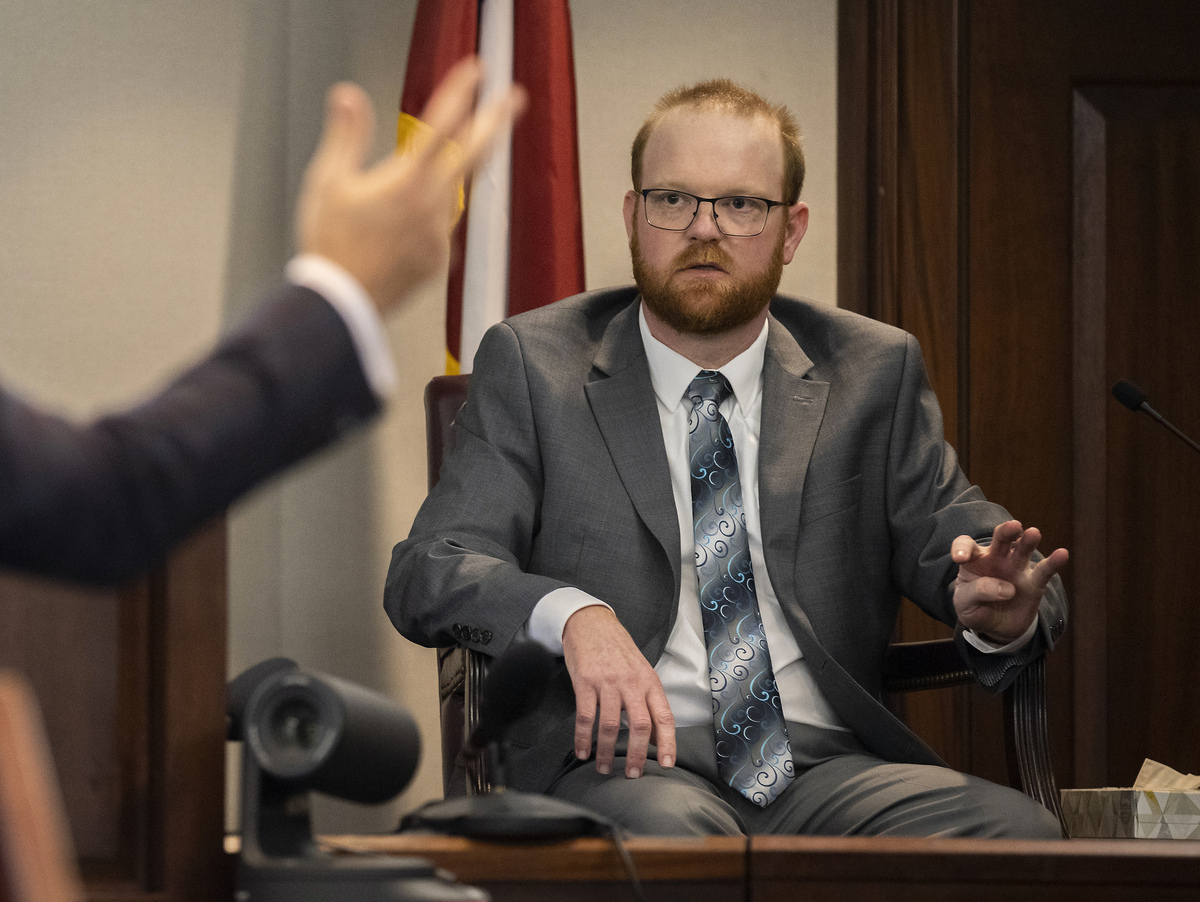 Travis McMichael is testifying in his murder trial in the Glynn County Courthouse in Brunswick, Ga. He, along with his father, Greg McMichael, and a neighbor, William “Roddie” Bryan, are charged in the February 2020 slaying of 25-year-old Ahmaud Arbery.

The prosecutor noted that McMichael had at least three opportunities to simply stop chasing Arbery, and to let the police handle the situation. She also said that on three occasions, Arbery made it clear that he didn’t want to talk to McMichael, as he kept running away.

McMichael said he got out of his truck at one point in the chase because Arbery had started running away from him. In that moment, he said, Arbery “was not a threat.”

“Why in the world would Mr. Arbery be a threat to you?” Dunikowski asked.

McMichael said he recognized Arbery as the same person he had seen 12 days earlier — a brief encounter at a nearby home construction site, during which McMichael said Arbery made a “threatening gesture” by reaching into his pants.

McMichael disagreed with Dunikowski’s characterization that he had attempted to circle around and cut Arbery off when he and his father were chasing Arbery in a pickup and William “Roddie” Bryan was chasing him in another truck. McMichael said that by pursuing Arbery, he hoped to talk to him about what he was doing at an under-construction house nearby.

McMichael introduced two new details on Thursday — first, by saying that during the chase, Arbery briefly stopped running, and second, by saying that Arbery took off again after McMichael told him the police were coming.

Dunikowski questioned him about those details, saying McMichael had not relayed them in earlier statements to police. McMichael said he was nervous and traumatized after the shooting.

The prosecutor asked why he was nervous — but McMichael rejected the idea that he had feared he would be going to jail.

“You just killed somebody and you don’t think you’re going to jail? That’s what you’re saying?” Dunikowski asked McMichael.

Questions center on the chase of Arbery

Dunikoski reviewed McMichael’s actions and statements about the McMichaels’ chase. She has previously said the pursuit lasted five minutes.

The prosecutor noted that McMichael told Arbery to stop; McMichael says it was a request, not an order. He also confirmed that when he was chasing Arbery, the man wasn’t carrying anything — a bag, backpack or a weapon.

He then said he didn’t think he startled Arbery when he drove his pickup truck up alongside him.

“I want to talk to you,” McMichael said he told Arbery.

At that point, Arbery stopped, turned and started running back the way he came, he said.

McMichael says he reversed his truck to follow Arbery and asked him what had happened near the house where Arbery had been seen moments before.

Earlier, McMichael agreed there was no reason to suspect Arbery for the theft of a gun from his truck. He also said he didn’t know who had stolen items from a boat belonging to Larry English — the owner of the under-construction house that Arbery was seen entering.

Under questioning from Dunikoski, McMichael said that when he ran out of his own home with his shotgun, he had not first gone to the English house to learn precisely what happened. Instead, he said, he pursued Arbery.

What are the charges McMichael faces?

The June 2020 indictment accuses the men of using their pickup trucks to chase and assault Arbery before killing him with a 12-gauge shotgun.

Who are the defendants in the case?

Gregory McMichael, 65, worked in law enforcement for decades, including a long stint as an investigator for the district attorney’s office in Brunswick. After spotting Arbery, McMichael later told police, he grabbed his .357 Magnum pistol and told his son, “Travis, the guy is running down the street. Let’s go.”

Travis McMichael, 35, shot and killed Arbery with a 12-gauge shotgun after chasing him in his Ford F-150 pickup. He is a former member of the Coast Guard.

William “Roddie” Bryan, 52, is the neighbor who jumped into his Chevrolet Silverado pickup to help chase Arbery. He used his cellphone to record video of the final moments of the confrontation.

Ten weeks passed between Arbery’s death and the first arrests in the case, after a video of the killing became public.

Who are the judge, prosecutors and defense?

Superior Court Judge Timothy Walmsley is presiding over the trial at the Glynn County Courthouse. The Eastern Judicial Circuit judge was given the case after all five judges in the Brunswick Judicial Circuit recused themselves. Walmsley was appointed to the bench in February 2012.

Lead prosecutor Linda Dunikoski is the senior assistant district attorney in Cobb County, outside of Atlanta. She was put in charge of the case in April, after two local prosecutors recused themselves.

Defense attorney Kevin Gough of Brunswick has represented Bryan since his arrest. Attorney Jessica Burton of Atlanta is also on Bryan’s defense team.

Along with the state charges, a federal grand jury indicted the McMichaels and Bryan on hate crime charges in April.

The federal charges also include the attempted kidnapping of Arbery, and the McMichaels are charged with using firearms during a violent crime. A February trial date has been slated for those charges.

A lawyer in the Arbery death trial tried to keep Black pastors out of court. So more than 100 will show up today

Defense rests in the trial over Ahmaud Arberys death